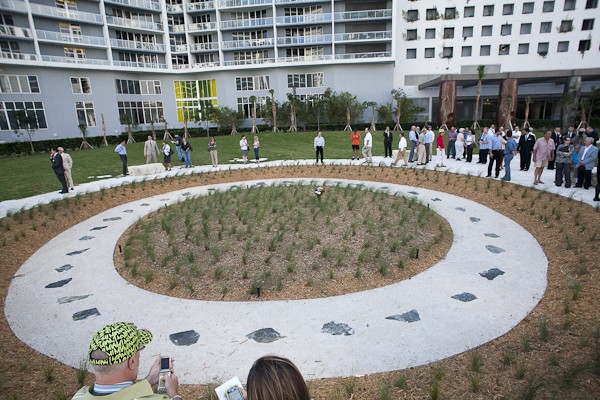 After almost 13 years and $27 million dollars, we still don't know what the Miami Circle looks like.

But at least we now have something to show those fools who claim Miami has no history.

Well, it's really not much to show; a neatly manicured circle of limestone rocks at the mouth of the Miami River in a park inaugurated Wednesday; a small patch of land more visible to passing boats than passing cars.

But the Miami Circle is older than the Liberty Bell, so take that history snobs, even if the actual circle does remain underground to protect it from the elements – and the graffiti that would surely have afflicted it had it remained exposed.

Discovered almost by accident in 1998, the Miami Circle is estimated to be about 2,000 years old and believed to have been some sort of ceremonial site for the Tequesta Indians, the original inhabitants of Miami, who were discovered by Spanish explorer Juan Ponce de Leon in 1513.

It is from the Tequestas where we get the name Miami. Or more precisely, Mayaimi, meaning “big water,” “open water” or “sweet water,” a reference to the Miami River, which back then, was a rapid flowing body of water connecting the Everglades to Biscayne Bay.

By the time developers dredged the river in the late 19th century to bring the railroad down here, the Tequestas had died off more than 200 years earlier.

And as they developed the land around it, constructing buildings and houses along the river, they emptied sewers into the river, polluting the once thriving river, which had already come to a standstill. And some argue that developers have been defecating on our city’s history ever since.

They developed the swampland so fast that Miami seemingly became a city overnight, hence the nickname, The Magic City.

It was through yet another wave of development that unearthed the Miami Circle.

In 1998, construction workers were demolishing a 1950s apartment building to make room for another luxury high-rise condo.

The developer, Michael Baumann, was trying to rush the project without going through the required archeological field survey.

Bob Carr, who was director of the Miami-Dade County Historic Preservation Division at the time, pressed the issue and began excavating the property, eventually discovering the Miami Circle - a 38-foot diameter of limestone marked by 24 holes.

Baumann wasn’t about to let an important historical discovery halt his project, so he kindly offered to move the Miami Circle to another area, an idea that Miami then-Mayor Joe Carollo supported, who some argue did his fair share of defecating on our city.

The county eventually sued and was able to halt the project.

Baumann, who had purchased the property for $8.5 million, offered to sell it to the county for $50 million, but eventually felt charitable and accepted $26.7 million.

On Wednesday, politicians, archeologists and a Native American spiritualist were on hand to dedicate the opening of the new Miami Circle park on the south side of the mouth of the Miami River.

It might not be grandiose, especially compared to the high-rises surrounding it, but it is where the magic all started in this crazy city of ours.

Now the challenge is whether we can maintain it without defecating all over it.

For once, let’s not let history repeat itself.